Before we begin, a brief reminder: Medical Justice provides free consultations to doctors facing medico-legal obstacles. We have solutions for patient conflicts, unwarranted demands for refunds, online defamation (patient review mischief) and meritless litigation. We also provide counsel specific to COVID-19. If you are navigating a medico-legal obstacle, request a consultation.

The same article was presented at the Annual Symposium of the Society of Clinical Vascular Surgery.

The fastest and most reliable way to piss off a doctor is to call them unprofessional. The article has since been retracted and the authors apologized.

Details of the firestorm.

The authors intended to research whether vascular surgery trainees and recent graduates had public-facing social media accounts with content that could negatively affect their future reputations. Sounds benign enough. But the research failed to consider most of these doctors had not yet graduated and, predictably, did not have a professional web site, walling off their professional life from their personal life. Most doctors, over time, have two social media presences. Their public professional life and private life. Still, sometimes one bleeds over to the other. Most of the time, it’s of no import. Zilch. Nada.

And the conclusion. Drumroll, please.

The authors must have forgotten even doctors have real-world lives. Most, if not all, national specialty medical conventions sponsor an open bar during the welcome ceremony. It rarely leads to bedlam and debauchery. Doctors go to the pool, swim at the beach, have opinions, support political candidates, vote, go to church, eschew religion, celebrate Halloween, hate Halloween, and do lots of things that keep them from burning out. Good for them.

Once the arcane article was picked up by national media, the Twitter thunderstorm erupted. https://twitter.com/hashtag/MedBikini

Female doctors proudly described they will wear what they want when they want. And it has zero impact on whether they’re professional or not. 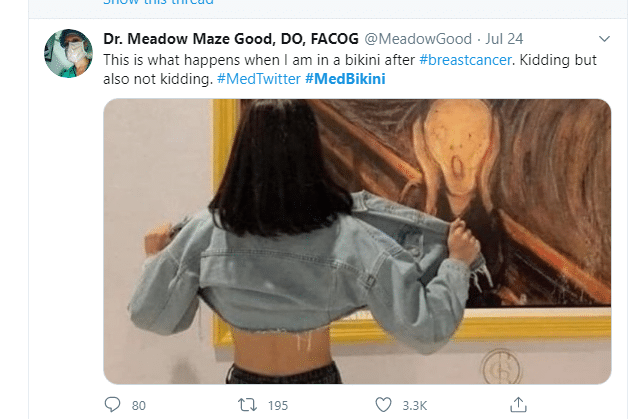 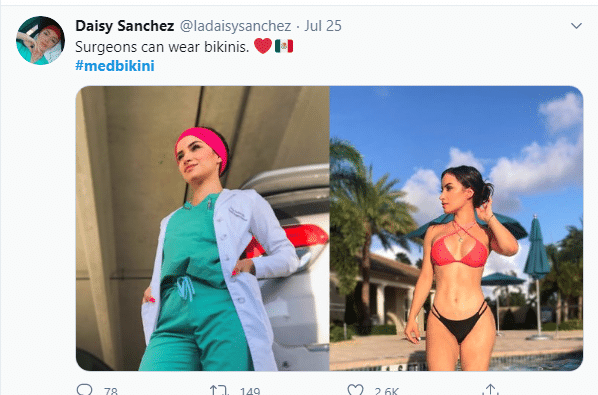 And, of course, solidarity from male colleagues. 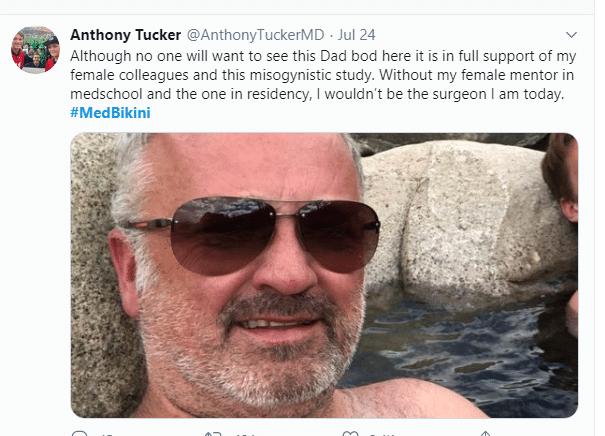 Other than the fact the research article was tone-deaf, does any of this matter?

Beyond the medical boards, can employers fire doctors for unprofessional conduct? Generally, yes. A private employer does not have to respect free speech rights. The government cannot shut you down for what you say (and even there, there are exceptions). Your employer can let you go. Every state other than Montana has “at-will” employment laws. That means the employer and the employee are each free to terminate the relationship. The only caveat is employers cannot fire a worker for discriminatory reasons. Discrimination may be based on race and sex. If an employer were to enforce off-hours dress codes, it would have to enforce it equally. No differentiation between men and women. Some states, such as California, Colorado, and New York make it difficult for employers to fire employees for behavior outside of work.

Doctors work hard. Doctors play hard. Most doctors wake up every day intending to do a great job for their patients. I doubt most patients fret if their doctor wears a bathing suit or has a beer. If these behaviors have no impact on patient care, patients should not care. My vote: The bar (no pun intended) for labeling some behavior as unprofessional should not be so low.

Enough of what I think. What do you think? Comment below.

PS: For those interested in the history of the bikini.

Clothing designer Louis Réard introduced his swimsuit in July 1946. He named it after the Bikini Atoll, where the first public test (Operation Crossroads) of a nuclear bomb had taken place only four days before. Purportedly, Réard—who hired a skywriter to advertise the new bikini as smaller than the world’s smallest bathing suit—claimed his version was sure to be as explosive as the U.S. military tests.

No runway model would wear it, so he hired a nude dancer from the Casino de Paris named Micheline Bernardini to model it at a review of swimsuit fashions.

A bathing suit qualified as a bikini, said Réard, only if it could be pulled through a wedding ring. He packaged the mere thirty squares inches of fabric inside a matchbox.
The Vatican formally decreed the design sinful, and several U.S. states banned its public use.

We challenge you to supply us with a medico-legal obstacle we haven’t seen before. Know you are in good hands. Schedule your consultation below.