Surrogate pregnancies are guided by state law. Each state is different. Michigan does not automatically recognize babies born to surrogates as the legal children of their biological parents.

That posed a problem for Jordan and Tammy Myers of Grand Rapid Michigan.

Each provided the genetic material to produce an embryo; an embryo which was implanted in a surrogate.

When born, Michigan labeled the surrogate (Lauren Vermilye) and HER husband as the legal parents of the twins. Note, the surrogate and her husband even filed a legal affidavit stating the Myers were the real parents.

The Myers began an adoption process. Adoption does not happen overnight, nor is it guaranteed.

This included home visits from a social worker, detailed questions about their approach to parenting, and background checks with fingerprints. By the way, the Myers were ALREADY parents to an 8-year-old.

The Myers needed to send reference letters to the state. And they needed permission from the surrogate to bring the twin babies home.

In 2015, the Myers wanted to have a second child. Tammy Myers soon learned she had breast cancer. She had eggs harvested, then underwent a number of procedures, including partial hysterectomy and bilateral mastectomy.

In a Facebook post, the Myers shared their story seeking an unpaid volunteer to help them have a baby.

Ms. Vermilye, 35, who also lives in Grand Rapids, read the post and sent them a note saying she was interested.

“My husband and I had talked about how I had a gift of carrying and delivering very easily,” said Ms. Vermilye, who has a girl and a boy who are 6 and 9. “We felt like it was kind of unfair that we had it so easy and have friends and family that don’t.”

The two couples became close friends. The Myers tried to get a court order mandating they were the legal parents. Unfortunately, a judge would not bless this conclusion. Judge Scott Noto, denied the request, saying he was being asked to validate a contract the state had deemed void. “The Court has no authority to enforce such a contract,” he wrote.

The Myers are likely to eventually succeed in adopting their twins.

With the benefit of hindsight, might it have been easier to do this in Indiana, a neighboring state, where surrogacy contracts are deemed enforceable? Uh-huh.

As noted, each state is different. The table below on state laws and surrogacy from Tsai S, et al. Surrogacy Laws in the United States, What Obstetrician-Gynecologists Need to Know. Obstetrics and Gynecology. 2020; 135: 717-722 is excellent. 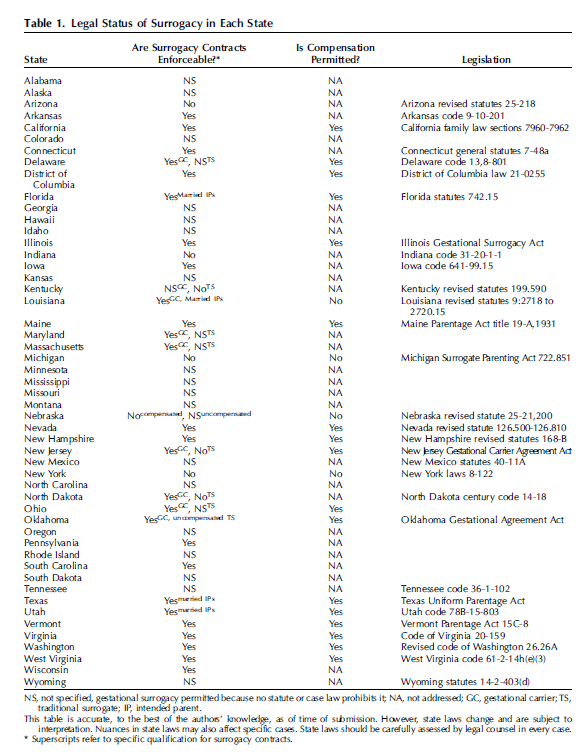 Even though the article was published in 2020, the landscape has already changed. Effective 2021, New York now allows surrogacy contracts to be enforced.

For decades, “surrogate parenting agreements” were deemed void and unenforceable by our state’s Legislature as contrary to New York public policy (DRL § 122). If the surrogacy agreement provided for the surrogate to be compensated, the parties, their attorneys and any other entities involved in the arrangement were also subject to civil and potentially criminal penalties (DRL § 123).

The CPSA adds an entirely new article – Article 5-C – to the New York State Family Court Act, which became effective on February 15, 2021 (FCA § 581). Pursuant to Part 4 of Section 581, entitled “Surrogacy Agreement,” parties may now enter into enforceable surrogacy agreements, and such agreements may provide for surrogate compensation, provided that all other statutory requirements have been followed (FCA § 581-401).

I hope the Myers complete the adoption process quickly.

What do you think? Let us know your thoughts in the comments below.