Hoverboarding Dentist Sentenced to 12 Years. Lessons on What Not to Do.

Before we begin, a brief reminder: Medical Justice provides free consultations to doctors facing medico-legal obstacles. We have solutions for doctor-patient conflicts, unwarranted demands for refunds, online defamation (patient review mischief), meritless litigation, and a gazillion other issues. We also provide counsel specific to COVID-19. If you are navigating a medico-legal obstacle, schedule a free consultation.

Schedule your consultation below – or click here to visit our booking page.

An Alaska dentist, Dr. Seth Lookhart, was sentenced to 12 years of prison for 46 charges including Medicaid fraud, embezzlement, reckless endangerment and unlawful dental acts. More on that in a minute. His prior claim to fame was extracting a tooth while on a Hoverboard.

“[In 2016] he pulled a tooth from a sedated patient while wobbling on a wheeled ‘hoverboard’ scooter. The evidence for this transgression again came from Lookhart himself, who had the hoverboard procedure captured on video. Lookhart then shared the video with several people.”

“Footage…shows Lookhart standing over a sedated patient, swaying slightly on his hoverboard while extracting a tooth. Once done, he rolls out of the room, strips off his gloves, tosses them, and triumphantly throws both hands in the air as he zooms away down a hallway.” 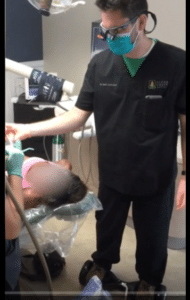 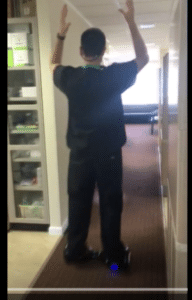 The patient who had her tooth pulled by Dr. Seth Lookhart while he was riding a hoverboard testified in court …as the last witness called by the prosecution.

Veronica Wilhelm was sedated when Lookhart performed the procedure in July of 2016. Wilhelm testified that she had been sedated previously when undergoing oral surgery because she is allergic to medicines used for local anesthetics.

“When did Dr. Lookhart get your approval to take out your tooth on a hoverboard?” prosecutor Joan Wilson asked.

“He never did. I obviously wouldn’t have approved that. That’s dangerous,” Wilhelm answered.

“If you were awake and not sedated when Dr. Lookhart came into the operatory on a hoverboard, what would you have said to him?” Wilson continued.

Wilhelm testified that she did not give consent to being filmed while sedated and that she didn’t know a video was taken until an investigator contacted her. Phone records show that Lookhart texted the video to at least eight people, in some messages calling it “a new standard of care.”

On cross-examination, Lookhart’s attorney apologized to the patient.”

Of course, extracting a tooth on a Hoverboard is not illegal. It is a very bad idea. But there were other charges. He supposedly fraudulently billed Medicaid $1.8M and stole approximately $250k from his partners.

“Medicaid patients would routinely be sedated for longer than necessary so the clinic could bill for more money. Investigators found numerous text messages from Lookhart describing the scheme.”

What precisely was fraudulent?

Costs for sedation services were not included in the $1,150 annual cap for adults in Alaska’s dental Medicaid coverage.

“If a patient was out of their Medicaid benefits, so they didn’t have anything available, we would waive that fee and they could do it with sedation, so there was still money coming in,” said former staff member Rachel Miner.

Thus, the billings generated from IV sedation services more than offset remuneration of other dental services, which were greatly reduced or eliminated. Another employee testified that a patient might be under IV sedation for up to three hours for a typical one-hour clinical procedure.

The government produced text messages between Cranford and Lookhart, with one stating, “So let’s build a practice around it, sedation, and let’s Medicaid it up.”

How did authorities learn of the alleged bad behavior?

“[The court noted] that in some of the text conversations, Dr. Lookhart’s friends would inquire about how he could get away with some of his practices. Dr. Lookhart responded, in effect, that unless someone was standing right next to him at the time, no one would ever know.

The overwhelming amount of evidence was often supported, and often in excruciating detail, by Dr. Lookhart’s own texts, photos and videos.”

“Lookhart also schemed to cut out his partners by billing Medicaid under a different provider identification and having payments sent directly to his home, prosecutors said.

Word of Lookhart’s Medicaid fraud reached investigators in 2016 when a former employee told the state that he was profiting by performing more IV sedation than needed.

Former employees alleged that Lookhart specifically pushed for the sedation procedure on Medicaid patients, while those with private insurance were given local anesthesia.”

There’s even more to this case. For example, civil suits alleging Lookhart pulled out the wrong tooth. But I hate to pile on.

What do you think? Share your thoughts in the comments below.

Schedule your consultation below – or click here to visit our booking page.