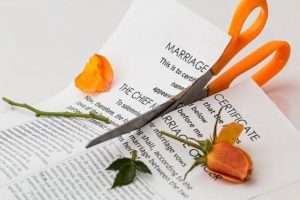 We continue with our series of general educational articles penned by one attorney, an MD, JD, giving you a view of the world through a malpractice plaintiff attorney’s eyes. This attorney is a seasoned veteran.  The series includes a number of pearls on how to stay out of harm’s way. While I do not necessarily agree with 100% of the details of every article, I think the messages are salient, on target, and fully relevant.  Please give us your feedback – and let us know if you find the series helpful. Finally, these articles are not intended as specific legal advice. For that, please consult with an attorney licensed to practice in your state.

Death and taxes are certain. The likelihood of winning the Powerball lottery is essentially zero. The probability of divorce is somewhere in between.

Marital breakups are a common fact of life, and their effects on the medical care of minors are matters that all doctors who treat children and adolescents should understand.

Let’s look at some FAQs about this important topic:

The parents of one of my patients have just separated. How does this change who I deal with, including addressing informed consent and HIPAA?

It depends on what they mean by “separated.” If they are just informally living apart then their rights, including consenting for medical care of their child, and as their child’s representatives under HIPAA, will stay the same, even if the child only lives with one of them. If, however, the separation is pursuant to a formal Separation Agreement that includes a change in their roles, then they should provide your office with a copy of that Agreement. Any prior instructions that you already have should be updated accordingly by the parents to comply with what is specified in the Agreement. However, bear in mind that a Separation Agreement is just a contract between the spouses and may even have been prepared without a lawyer’s assistance. It is not a vetted court document. If they want changes that you believe are not in the best interests of your patient, then you should terminate the doctor-patient relationship.

The parents of one of my patients have just divorced. How does this change who I deal with, including for informed consent and HIPAA?

The terms of the formal dissolution of the marriage will be under an Order from the court that granted the divorce. You will need to follow what the Order dictates as far as who is in charge of the child’s medical care and, as above, any necessary changes to what you have in your files about access of records should be made.

Can I rely on the “custody” situation as far as who has the medical decision-making role?

Can I rely on what a parent/the parents tell me is in the Order?

You should not. The ending of a marriage is fraught with emotionally charged power dynamics, especially when a child is involved, so you want to make sure you understand the specifics. You should request a copy of the Order for your files, or at least the relevant sections if the rest is denied as being too personal. If the parent(s) will not provide the Order, it can be obtained from the Clerk of the Court. But understand that such refusal is a red flag of future conflicts over the child’s care and you may want to therefore consider termination of the doctor-patient relationship.

[Medical Justice Note: Terminating the doctor-patient relationship is a topic we’ve written about extensively and understand viscerally. Read this article to uncover the critical points.]

Can I rely on a letter from a parent’s attorney?

You should not. This is a “partisan” source. Following the rules a court set in place will be your defense against any later misconduct claim by a disgruntled parent. You want to know exactly what the court said in its own format.

If the Order says that the parents have “joint legal custody” what does that mean for medical decision-making?

This status is not functionally different than the pre-divorce situation of the parents caring jointly for their children in an intact family. It means that they each have equal say over the children and that means that either parent can make medical decisions alone. However, in the often acrimonious setting of a divorce, the court may grant joint legal custody but then stipulate that medical decisions have to be made together. If the Order is not clear, then ask the parents to get clarification for you.

Can I have an office policy that requires the parents to act together even if the Order does not specify it?

As long as the parents have joint legal custody and the Order is otherwise silent, you can stipulate your own office policy to require them to act together in the child’s care with you. Of course, if you do so then you are responsible for providing them both access to medical records and for fully informing them both of the risks and benefits of that care and getting their consents, just as if the court had ordered them to act together.

What if the law in my state says that parents may equally individually consent for a type of treatment, such as mental health care, for their child but the Order says that they must act together?

Follow the Order. These state laws are floors that apply to the presumed situation of parents in an intact family, not the ceiling of one that has been dissolved under new constraints. If a parent opposes that they can seek a new court Order from the court requiring you to deal with just a single parent.

How can I know if parents have changed their marital status in between visits?

You should have a stated office policy that if such a change in marital status occurs, the parents should notify the office, along with any changes that this produces in how the child’s medical care will be handled. The front office staff should also check that there have been no changes when the child comes in for a routine visit, just as they check for changes in address or insurance coverage.

A divorced parent of one of my patients has remarried. What is the role of the stepparent in the child’s medical care?

Inherently there is no role unless there has been an actual adoption that severs the legal connection to the birth parent. The adoption would then make the previous stepparent now a legal parent. Alternatively, the stepparent may qualify under a separate state law as an Authorized Caregiver. This would provide the stepparent with legal rights in many states. A stepparent may also be granted limited rights in the child’s care by a parent who themselves has those rights. For example, suppose that the mother works long hours running a restaurant while her new husband works from home as an accountant and has more time to take her children to medical appointments. She can authorize him to receive medical information on the children under HIPAA to then convey to her, but she cannot pass her decision-making role to him.

After the parents of one of my patients divorced, the child went to live with a grandparent who is now the legal guardian. Who do I deal with in the child’s care?

The grandparent, because a legal guardian now has the legal status that accrues to a parent. The change in the child’s custody now overrides any allocation of medical decision-making to the parents in the divorce Order.

After the parents of one of my patients divorced the child went to live with a foster parent. Who do I deal with in the child’s care?

It would have to be determined based on the level of care. Foster parents are allowed to consent for “ordinary” care such as physical examinations, X-rays and potentially immunizations. Beyond that, the medical decision-making role may reside with the foster parent, a birth parent, both birth parents, the foster agency or municipality or a monitoring court. The foster parent should provide your office with this information.

The parents of my patient used to get along on issues of the child’s medical care but since their divorce they just fight over everything and impede my care as the child’s doctor. They have joint rights to determine that care. What can I do?

Unless a parent’s conduct, as an impediment to care, rises to the level of reportable abuse or neglect you have to deal with this as you would any other situation of hard-to-deal-with parents and try to reason with them. You have no standing to petition the court on this issue. If their post-divorce conduct is impeding the child’s care, then you should consider terminating the doctor-patient relationship. Finally, if the child’s life or limb is in danger, you can obtain a court order to override their harmful decisions. This is sometimes seen where one or both parents refuse chemotherapy for their child for a treatable cancer.

The parents of my patient have joint medical decision-making roles in their divorce Order, but one is now falling for a lot of internet quackery and refuses to cooperate with very standard care. What can I do?

Again, short of reportable conduct that is harming the child, not much. You cannot be the tiebreaker, siding with the parent that you agree with. You can only offer your own expert input and terminate if delivery of care meeting appropriate standards becomes impossible. However, if the parent who wants reasonable care delivered wants to challenge the allocation of medical decision-making power, he/she can make a Motion to the court that granted the Order. You can support that Motion by affidavit or testimony.

Can a parent who has the sole medical decision-making role prevent the other parent from having access to the child’s medical records?

Generally not, unless the Order states otherwise in the best interests of the child.

In summary: When there is the dissolution of a marriage physicians must be very careful to determine, from official documents, which adult has what legally-sanctioned role in a minor’s care and then abide by that in matters of informing, consenting and records access.

[Medical Justice comments: Divorce can be volatile. Who has say in decisions affecting the kids can be contentious. Get the original Court Order and make sure it is updated. Don’t guess. Sometimes divorced parents will target the doctor when their real anger is at the other parent. Stay out of the crosshairs by knowing the roles and responsibilities of each divorced parent.

We stated this in a previous publication, and it bears repeating. Administering care to minors becomes a minefield when guardianship is unclear. Divorce muddies the waters. You don’t want a dispute with the family becoming a problem for your young patient or a distraction/liability for your practice.

The bottom line: Medical Justice is well acquainted with the laws and regulations governing these encounters. In the event you are propelled into this situation – or any prickly medicolegal obstacle – contact us. We’ll guide your through the storm. Use the resources below to get in touch.]