The Art of Being in “Two Places” at the Same Time

In 2017, a high profile medical malpractice highlighted what is euphemistically known as “overlapping surgery.”

The American College of Surgeons defines operations as concurrent “when the critical or key components of the procedures for which the primary attending surgeon is responsible are occurring all or in part at the same time” and as overlapping “when the key or critical elements of the first operation have been completed, and … a second operation is started in another operating room while a qualified practitioner performs noncritical components of the first operation.

With concurrent surgery, the “hard part” of the two surgeries are done at the same time.

With overlapping surgery, the “hard part” of the two surgeries are NOT done at the same time.

And, even with overlapping surgeries, distinctions are made as to how much overlap is actually occurring. 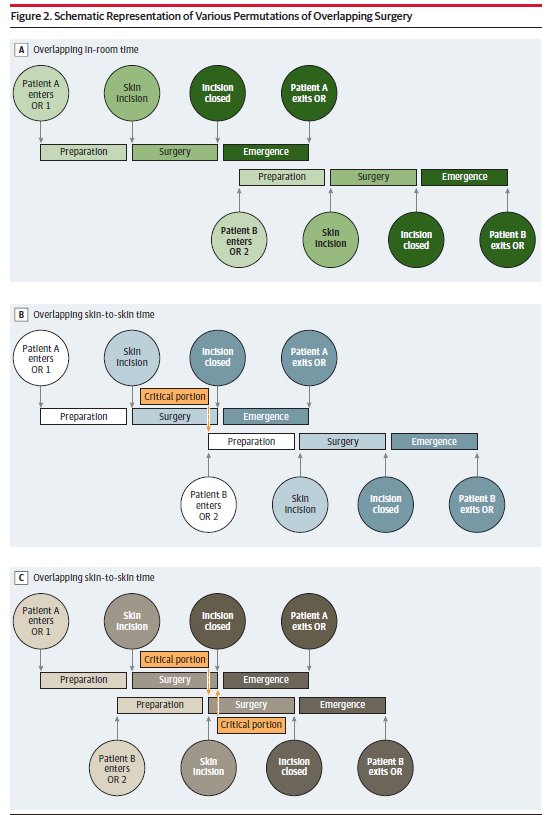 This issue has been addressed by Senate Finance Committee and has been a hot topic in medical centers where high volume surgeons engage the practice. In 2016, the American College of Surgeons updated its Statement of Principles:

The patient needs to be informed in either of these circumstances. The performance of overlapping procedures should not negatively affect the seamless and timely flow of either procedure.

The American College of Surgeons states that concurrent surgeries are not appropriate (and this parallels Medicare billing rules); while overlapping surgeries are, as long as the patient is informed.

A recent paper looked at retrospective data to see whether overlapping neurosurgical procedures put any patients at increased risk. Data from matched overlapping to non-overlapping procedures were analyzed. The primary differences between the two groups were narrow. The overlapping surgery patients had longer in-room times and longer skin-to-skin times; possibly because the team was waiting for the surgeon to show up and do the critical work. Regardless, there was no association between mortality, morbidity, or worsened functional status. In aggregate, overlapping procedures did not put the patient in harm’s way.

The primary argument in favor of overlapping surgeries is that is has the potential to benefit patients by maximizing efficiency and making highly sought-after specialists available to greater number of patients. And recent data suggests this benefit is not at the expense of increased patient risk.

Ten years ago, we ran a contest, encouraging doctors to reveal if they had been involved in a frivolous lawsuit. We awarded a prize to the Most Frivolous Lawsuit. Cold comfort. Still, the winner did receive a free membership for one year with Medical Justice. We are running that same contest again.

Send us a brief description of what you believe qualifies for the most frivolous lawsuit. Email us at infonews@medicaljustice-staging.shfpvdx8-liquidwebsites.com. You have to have personal knowledge of the case. Either you were a named defendant. Or you knew the named defendant.

The winner will receive a free year’s membership to Medical Justice. Determination will be made by December 14, 2018 and announced soon after via our weekly e-blast and blog.

(The usual caveat, void where prohibited by law).

May the best defendant win.

If you have a medico-legal question, write to Medical Justice at infonews@medicaljustice-staging.shfpvdx8-liquidwebsites.com.