To Mask or Not to Mask. That is the Question.

For decades, surgeons have performed elaborate rituals to minimize risk of infection to patients. We wash our hands. Don gloves and gowns. Cover our hair. Avoid reaching over our heads or below our waist (except to adjust the light – yes, I know, the rituals are imperfect). It’s a familiar exercise. And it works.

Surgical infections are uncommon. Operating suites are not clean rooms. Patients are still exposed to bacteria. We try to lower the potential inoculum to an amount most patients can handle with a functioning immune system.

I cannot recall a single surgeon ever making a libertarian argument it’s his choice whether to adhere to these rituals.

That was not always so.

Ever heard of Dr. Ignaz Semmelweis? He was a Hungarian physician. His key innovation – cutting the incidence of puerperal fever (“childbed fever”) in obstetrical clinics by using hand disinfectants. Puerperal fever was common and often fatal. Semmelweis’ radical proposal in 1847 was washing hands with chlorinated lime solutions. At the time, the doctors’ wards had three times the mortality of midwives’ wards. When implemented, hand washing crushed the mortality rate. It worked.

During 1848, Semmelweis widened the scope of his washing protocol, to include all instruments coming in contact with patients in labor, and used mortality rates time series to document his success in virtually eliminating puerperal fever from the hospital ward.

How did the medical community react?

Semmelweis was treated as a pariah.

He could offer no acceptable scientific explanation for his findings, and some doctors were offended at the suggestion that they should wash their hands and mocked him for it. In 1865, the increasingly outspoken Semmelweis supposedly suffered a nervous breakdown and was committed to an asylum by his colleagues. He died 14 days later after being beaten by the guards, from a gangrenous wound on his right hand which might have been caused by the beating. Semmelweis’ practice earned widespread acceptance only years after his death, when Louis Pasteur confirmed the germ theory, and Joseph Lister, acting on the French microbiologist’s research, practiced and operated using hygienic methods, with great success.

Certainly, harsher than having to present at a peer review committee meeting.

Semmelweis paved the way toward wide acceptance of infection control.

I trained at Baylor College of Medicine. There, urban legend had it a visiting professor from another country was watching a famous cardiac surgeon operate. The professor stood next to the anesthesiologist, peering over the drape. His glasses supposedly fell into the wound. The surgeon removed the polluting object and returned it to the visiting professor. (Was it first washed? I have no idea. This is an urban legend.) Although the cardiac surgeon had a famous temper, he kept his cool. The same hour, the visiting professor’s glasses fell into the wound again. The surgeon merely looked up and said, “Why don’t you take your pants down and defecate in the wound?” Urban legend has it he used a synonym for defecate.

Onward to masks. In May, Lancet published an article on the history of the surgical mask.

Covering the nose and mouth had been part of traditional sanitary practices against contagious diseases in early modern Europe. This protection was primarily about neutralising so-called miasma in the air through perfumes and spices held under a mask, such as the plague doctors’ bird-like masks. Such practices, however, had become marginal by the 18th century. 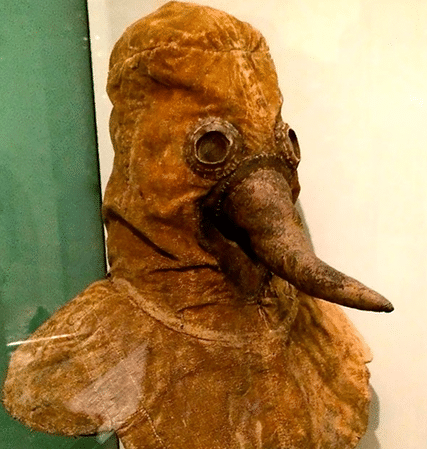 Following a hiatus of several centuries,

Johann Mikulicz, head of the surgery department of the University of Breslau (now Wroclaw, Poland) started working with the local bacteriologist Carl Flügge, who had shown experimentally that respiratory droplets carried culturable bacteria. In response to these findings, Mikulicz started to wear a face mask in 1897, which he described as “a piece of gauze tied by two strings to the cap, and sweeping across the face so as to cover the nose and mouth and beard”. In Paris, the surgeon Paul Berger also began wearing a mask in the operating room the same year…

However, masks became increasingly widespread. A study of more than 1000 photographs of surgeons in operating rooms in US and European hospitals between 1863 and 1969 indicated that by 1923 over two-thirds of them wore masks and by 1935 most of them were using masks.

It was mainly the use of the mask to cover the mouth and nose (and beard) during the Manchurian plague of 1910–11 and the influenza pandemic of 1918–19 that turned the face mask into a means of protecting medical workers and patients from infectious diseases outside of the operating room. During the 1918–19 influenza pandemic, wearing a mask became mandatory for police forces, medical workers, and even residents in some US cities, although its use was often controversial. Yet in cities like San Francisco, the decline in deaths from influenza was partly attributed to the mandatory mask-wearing policies. At this point, the rationale for wearing masks moved beyond their original use in the operating theatre: they now also protected the wearer against infection.

Medicine moved from reusable to single use protective equipment.

Medical masks started to be replaced by disposable paper masks during the 1930s and were increasingly made of synthetic materials for single use in the 1960s. By the early 1960s, there were advertisements for new kinds of filtering masks made of non-woven synthetic fibres in nursing and surgery journals. These filtering masks were all disposable.

Industry-sponsored studies found the new synthetic masks to be superior to traditional reusable cotton masks. More frequently, however, reusable masks were omitted from comparative studies. In 1975, in one of the last studies to include an industrially manufactured cotton mask, the author concluded that the reusable mask, made of four-ply cotton muslin, was superior to the popular disposable paper masks and the new synthetic respirators. He noted that “cotton fabrics may be as effective as synthetic fabrics when incorporated in a good mask design.” Some studies have suggested that washing reusable masks might increase their bacterial filtering efficiency, perhaps by tightening their fibres. In the absence of commercial cotton masks, more recent studies have only compared artisanal or homemade masks with industrially produced disposable masks, finding the latter to be superior. These results to some extent reinforced the idea that reusable masks were potentially unsafe, partly discouraging further research into well designed and industrially manufactured reusable masks.

Perhaps one day it might again be possible to say about protective face masks what medical researchers wrote in 1918: “A mask may be repeatedly washed and used indefinitely.”

My take on the mask wearing debate conforms to what most physicians are advising as we reopen our economy during the COVID-19 pandemic. Just wear a mask.

If I were king, I would mandate this until we have better therapeutics or vaccines: (a) No super-large gatherings. (eg professional football games, rock concerts, Mardi Gras); (b) face masks; and (c) hand washing (ubiquitous alcohol-based goop). That’s mostly it, although as king I’d probably have to fill in some details. We can still have a functioning economy.

My measures as king require some sacrifice. But, let’s admit it, are they really that big a deal? People should just do that stuff anyway. Sorry to be crude – I wash my hands after I have a bowel movement. No law needed. I don’t go on TV crying about freedom to not wash my hands after I wipe my bottom. It’s just good sense. And I’m sure people around me are glad I take THAT minor act seriously. I don’t consider the choice to wipe or not wipe my bottom an act of libertarian deliberation. Of course, once I buy the Toto I’ve had my eye on, I WILL have a choice. That’s a story for another day.

There are analogous public health measures we already accept; for example, related to driving under the influence. The vast majority of times a person has a blood alcohol over 0.08%, he is able to make it home without crashing into a tree or killing riders in other cars. That statistic does not inform our laws. We agree that because we don’t know when some drunk driver will be lethal, we just ban all driving while under the influence. Because we don’t know when some asymptomatic or pre-symptomatic COVID-19 petri dish may infect a vulnerable person, we consider mandating measures (such as wearing a mask) to prevent a bad outcome.

The effort required to wear a mask is minimal. The inconvenience slight. The potential benefit great. It’s always a balancing act. We know more now. We still have much to learn. Not everyone will agree with me. What do you think? Comment below.