When Doctors Sue Patients – Defamation Is Devastating, but a Lawsuit Could Make It Worse 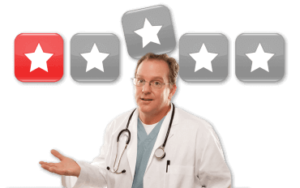 Before we dive in, some fast advice. Suing a patient for defamation is challenging. It will likely propel you and your practice into the spotlight – and not in a good way. If you are a doctor who is considering suing a patient for defamation, schedule a consultation with our Founder and CEO, Jeff Segal, MD, JD. We can help you determine the best course of action for your circumstances. And for more content specific to doctors combating internet defamation, read: Defeating Internet Defamation: How Doctors are Crushing Lies Online.

Doctors suing patients (and their families) is news.

Several cases are percolating through the legal system. In each, a doctor sued a patient (or patient’s relative) for online mischief. Doctors are starting to prevail in the legal system. Whether this is a useful strategy for all doctors will be discussed further down. First the details.

In Carlotti v. Petta,  Dr. Carlotti, a cosmetic surgeon,  successfully sued his former patient – receiving a jury verdict of $12 million in December 2011. In 2007, Albert Carlotti, performed a number of procedures on Ms. Petta, a singer, including a rhinoplasty.

To say Petta was unhappy would be an understatement. She launched a website which claimed, among other things, that Dr. Carlotti was not board-certified. Records showed he was board certified by the American Board of Oral and Maxillofacial Surgery.

Petta’s actions took a toll on the practice. “I was dealing with somebody who had the intent of destroying us professionally, personally and on every level. I went from a very successful surgeon to pretty much out of business.” Carlotti considered relocating to another country. He was forced to sell his home. And he shed over 30 pounds due to stress.

As a last resort, Carlotti sued Petta for defamation. A jury listened to testimony over three weeks. They delivered an 8 figure verdict in one day. The case will likely be appealed. [Update: On January 15, 2015, the Arizona Court of Appeals vacated the lower court judgment noting “the evidence presented [did] not support such an excessive award of general damages.” The Court of Appeals mandated a new trial to address both liability and damages.]

In McKee v. Luarion, Dr. McKee, a neurologist, sued his patient’s son for online defamation. In April, 2010, McKee was reviewed on a doctor rating site.

“My father spent 2 days in ICU after a hemorrhagic stroke. He saw a speech therapist and physical therapist for evaluation. About 10 minutes after my father transferred from ICU to a ward room, Dr. David C. McKee walked into a family visit with my dad. He seemed upset that my father had been moved. Never having met my father or his family, Dr. McKee said, “When you weren’t in ICU, I had to spend time finding out if you transferred or died.” When we gaped at him, he said, “Well, 44% of hemorrhagic strokes die within 30 days. I guess this is the better option.” My father mentioned that he’d been seen by a physical therapist and speech therapist for evaluation. Dr. McKee said, “Therapists? You don’t need therapy.” He pulled my father to a sitting position and asked him to get out of bed and walk. When my father said his gown was just hanging from his neck without a back, Dr. McKee said, “That doesn’t matter.” My wife said, “It matters to us; let us go into the hall.” Five minutes later, Dr. McKee strode out of the room. He did not talk to my mother or me. When I mentioned Dr. McKee’s name to a friend who is a nurse, she said, “Dr. McKee is a real tool!””

The patient’s son sent letters to the hospital and assorted medical associations making the same claims. McKee sued the son in Minnesota court. The case was thrown out on summary judgment. Truth and opinion are two defenses to allegations of defamation. The judge concluded the review contained statements of opinion, true statements, and vague statements. Accordingly, the judge ruled against the doctor. McKee appealed his case.

January 23, 2012, the Minnesota Court of Appeals overruled the lower court, sending the case back to be heard by a jury. The court ruled that many of the statements were factual assertions – not opinions. And many of the statements were capable of harming the doctor’s reputation. For example, the following statements suggested the doctor was rude, insensitive, and morbid: the doctor had to “spend time finding out if [the patient was] transferred or died”; “44% of hemorrhagic strokes die within 30 days. …this is the better option”; and “[It] doesn’t matter” that the patient’s gown did not cover his backside. So, the case lives on.

In the past, some doctors have tried to sue various doctor review sites. But, such sites are immune from most litigation. They are protected by Section 230 of the Communication Decency Act. Section 230 is a federal law which makes it impossible to sue a web based platform for defamation. That said, if a doctor can identify the actual author of a defamatory post, he can sue that person. In the cases above, the doctor was able to easily identify the author. More often, it can be challenging – as most posts are uploaded anonymously.

So, is it a good idea to sue a patient for defamation? In most cases, the answer is no.

What type of statement might be considered defamatory? One which is easily proven to be false. For example, “Dr. X is not board certified” – when he is. Or “Dr. X charged $15,000 for the surgery” when the documented price was $3,500.

Next, litigation can be capricious and expensive. Even if you win a judgment, the defendant might have no assets. A Pyrrhic victory.

Most importantly, suing a patient brings attention to the nasty post. If that post could only be located on a Google search buried on page 3, suing the patient is the most effective way to move the post to page 1 – an undesirable outcome. In other words, suing for defamation might increase the damage caused by the post.

This phenomenon is known as the Streisand effect. In 2003, Barbara Streisand attempted to suppress photographs of her residence appearing online. She sued a photographer, Kenneth Adelman, and Pictopia.com for $50 million hoping to have an aerial picture of her mansion removed from a publicly available collection of 12,000 California coastline photographs. The photographer said he took shots of beachfront property to document coastal erosion. Before Streisand filed her lawsuit, “Image 3850” was downloaded from Adelman’s website less than ten times (2 of those times were from Streisand’s attorneys). After the lawsuit was filed, more than 420,000 people visited the site the following month. Streisand did not prevail.

The best way to prevent damage from isolated online posts is by accumulating real reviews from confirmed patients. This will dilute whatever effect the negative post has. The public understands you cannot make everyone happy 100% of the time. Even the Ritz Carlton gets an occasional bad review. If you only have great reviews, the public will likely discount the authenticity of such reviews. If there’s an occasional bad review, the public will perceive all reviews as authentic.

Don’t be afraid to invite your patients to give you feedback. The literature suggests most patients are happy with their doctors. Tehrani, et al.[1] recently published an article summarizing findings of validated online patient satisfaction surveys. They concluded the great majority of patients reporting their satisfaction online are highly satisfied with their outpatient medical care. The overall patient satisfaction rating was 9.28 on a scale from 1-10. Of the ~15,000 ratings captured, 10,510 (70%) were 10s and another 2,291 (15%) were 9s.

Suing a patient makes news. Pre-emptively asking your patients for online feedback is not remotely newsworthy. But, that strategy is more likely to help you control your online reputation. Request a complimentary consultation. We are equipped to neutralize patient disputes and help you protect your reputation. And for more content specific to doctors combating internet defamation, read: Defeating Internet Defamation: How Doctors are Crushing Lies Online.

Jeffrey Segal, M.D., J.D., is founder and CEO of Medical Justice. Medical Justice is a physician based organization focused on keeping doctors from being sued for frivolous reasons. In addition, Medical Justice helps doctors control their online reputation.

Our Executive Team walks with our member doctors until their medico-legal obstacles are resolved - we've seen it all.